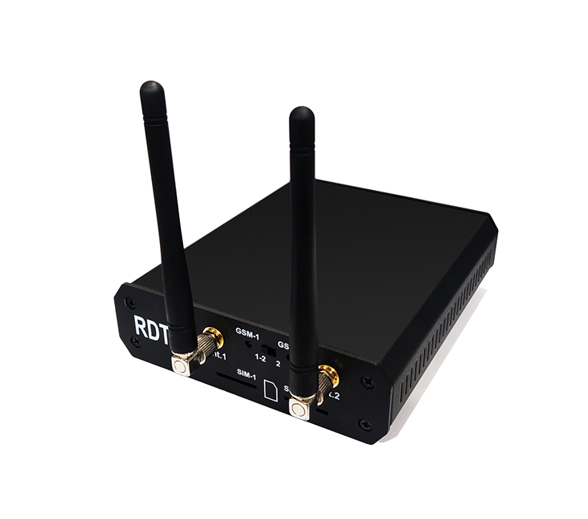 The RDT-33 multifunctional wired and wireless VPN-router is a unique development of Infocom, created by its own forces to allow the building of secure VPN networks, organizing access to the Internet, and providing active redundancy. RDT-33 is a compact industrial-type device which design and functionality are based on many years of experience of the previous wireless router model, which is still used to operate about one and a half thousand ATMs and self-service terminals nationwide, payment terminals, state special transport, and ensure users Internet access in places devoid of developed cable infrastructure.

One of the main purposes of the RDT-33 is to provide a constant active redundancy of communication channels to organize a reliable continuous connection of users to VPN-networks or the Internet. To implement this feature, the router is equipped with two independent 2G/3G/4G modems and three Gigabit Ethernet ports, and at the software level of the device, the possibility of dividing existing communication channels into main and backup is implemented.
During its operation, the RDT-33 constantly analyzes the quality of the main communication channel and automatically switches to backup channels if any problems are detected. If there are two wired and two wireless connections, the device, if necessary, has the ability to organize triple redundancy in fully automatic mode.

Two built-in modems that support the common cellular standards and active redundancy feature allow using the RDT-33 to build secure data and Internet access channels where traditional wired networks are not available, or if the construction and use of such channels are economically impractical. An example of such an application is the widespread use of Infocom routers to build secure communication channels between ATMs and the main processing centers of the respective banks. The wireless router allows placing ATMs in any place where cellular communication and connection to the power grid are available.

Using mobile network resources to build secure communication channels and access the Internet allows using the RDT-33 in cases where you need to be able to move freely and have a secure connection. The range of 12V-24V supply voltage allows to connect the device directly to the car’s mains, and the use of external antennas provides a better signal than the built-in antennas of mobile phones or most commercially available USB modems.

Want to get
a consultation?